The latest episode of the popular Netflix show is a typical fast-paced, funny adventure featuring our favorite amphibian friends. However, there’s one moment that stands out from the rest and it might just be one of the most important moments to date for these four adventurers. And that moment was when Nona found love in her heart through song. 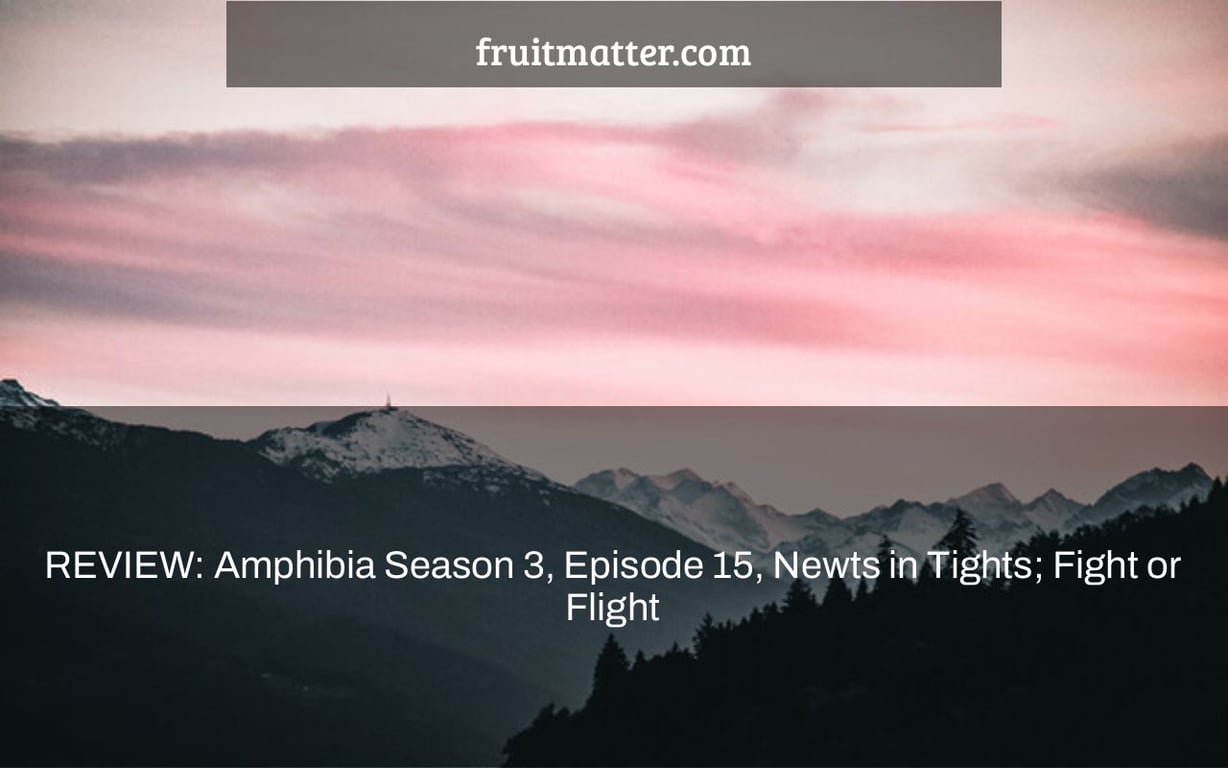 In “Newts in Tights,” Anne and Sprig are conducting recon when Andrias’ forces are ambushed by Robin Hood-style newts. Tritonio, Anne, and Sprig’s deceitful old sword teacher lead the newts. In return for joining the resistance, they pledge to assist Tritonio’s gang attack the creatures that Andrias has enslaved. Tritonio tells Anne about scavenging on the streets as a youngster and how thieves have no allegiance or affection. When Andrias’ troops ambush the band, they are captured. Tritonio wants to flee instead of saving them, but Anne persuades him to accompany her and Sprig on a rescue expedition. Andrias’ robots are destroyed, and Anne, Sprig, Tritonio, and his pals escape. Back at base, Hop Pop and Sasha show Anne a secret chamber that requires the Plantar family tome to access. They discover a blank piece of paper inside. The film “Fight or Flight” is about the rebels’ food supply and the mysterious disappearance of their stockpiles. Anne learns that Domino 2, the Kill-a-Moth she temporarily adopted, is stealing the food. Andrias’ supporters capture Domino 2, leaving numerous “kittens” without a mother. She brings the kittens to camp for protection, against Sasha’s, Hop Pop’s, and even Sprig’s advise, and they set out to release Domino 2. They locate her in a cage with numerous other fully developed moths, but Domino 2 attacks Anne first. She recalls her old guardian when her collar is broken off, and she even protects Sprig from the other moths. Domino 2 is the leader in her pack, and as a result, the other moths follow her and aren’t a danger to the revolt, as Anne and Sprig learn. They return the moths to Domino 2, reuniting her with her children while also increasing resistance defenses.

Wow. So far, this season has been really fantastic, but this is an especially great combo of tales. In both episodes, they continue to reintroduce previously minor characters, and the returning characters are incorporated in meaningful and gratifying ways. I hadn’t expected to see Tritonio again, but they deepened his character and atoned for his selfishness. Domino 2 was fantastic since I’m a sucker for cats, especially strange bug-cats from alternative realms. I was ecstatic to see her again, and even more so when Anne enlisted her and the other moths. For the resistance, giant flying cat mounts? Please accept my request. This season’s allusions and Easter eggs have been spot on, and although I wasn’t expecting a Men in Tights-themed episode, I’m not complaining. Tritonio and his people’s explanation for why they wear the titular tights had me laughing out loud, particularly when they waved their legs at Anne. This episode features Archie Yates as a guest star. He is well recognized for his performance in Jojo Rabbit, and he also portrays a character called Jojo in this film. I haven’t watched the film, so I may have missed a few of his character’s jokes. The conflict and ending of the narrative were evident from the start, but it worked for the characters, and sometimes less is enough. Tritonio doesn’t need a huge dramatic scene when he discovers he cares about his buddies; that much is self-evident, and screen time is limited. I adore minor elements like Jojo’s innocence and sparkling eyes, which are similar to Tritonio’s in the flashback. Tritonio would have violated the boy’s relationship and shattered his confidence in people if he had carried out his first intention of fleeing and leaving his companions, just as he had done as a child. I wish the battle to preserve the merry band had lasted a bit longer; the judge robot and his comments about justice and the law were hilarious.

Much though the only reference I saw was Domino 2 looking like Mothra until Anne came near to her, I appreciate “Fight or Flight” even more. I’m not sure whether it was done on purpose, but it wouldn’t surprise me in the least. I’m a sucker for tales about animals and the bonds we form with them, so any episode starring Domino 2 or Domino, Anne’s domestic cat, gets a leg up in my book. I like the kill-a-pillars’ overpowering cuteness power over the frogs. In a world like this, it seems reasonable that they would acquire this feature, and honestly, it would work on me, and I’d be moth food. Most programs wouldn’t know how to do this, and it would be just too ridiculous, but Amphibia’s unique environment allows for it. Hop Pop’s first resistance to the moths and subsequent acceptance is amusing. He’s like a father who doesn’t want a pet but can’t stop himself from getting one once he sees one. Wally dressing up one of Domino 2’s “kittens” as himself made me laugh as well. Overall, I don’t have much to say about this episode since it’s sweet and cuddly, which is my #1 weakness. In a sense, the happy reunion between Anne and Domino 2 makes me sad; Domino 2 must have been perplexed the whole time, wondering where Anne was. When Anne returned to Amphibia, the original Domino was presumably distraught to lose her owner again again. When the conclusion airs, and Anne probably returns home, they should show her and the original Domino together again.

Overall, this is a fantastic half-hour of television. Matt Braly’s sense of humor and tendency for making bizarrely precise movie allusions are on full show in “Newts in Tights.” It transforms Tritonio from a one-episode side villain to Anne and the Plantars’ friend and ally. “Fight or Flight” is also entertaining, and Anne’s reunion with her previous pet made me cry. This sort of species does not exist, but I need 10 right now! This season is just getting better, and I’m looking forward to seeing how they close things out. In any case, I’ve really loved this program and will miss it when it ends.

Overall, this is a fantastic half-hour of television. This season is just getting better, and I’m looking forward to seeing how they close things out. In any case, I’ve really loved this program and will miss it when it ends.