This list is in no particular order. Moonlight Heroes are a breed of powerful characters which can be found all over the realm within Epic Seven and these heroes have the potential to become 5-Star units.

This is a list of the best 5-star Moonlight Heroes in Epic Seven. The list includes all of the heroes, their stats and how they rank. 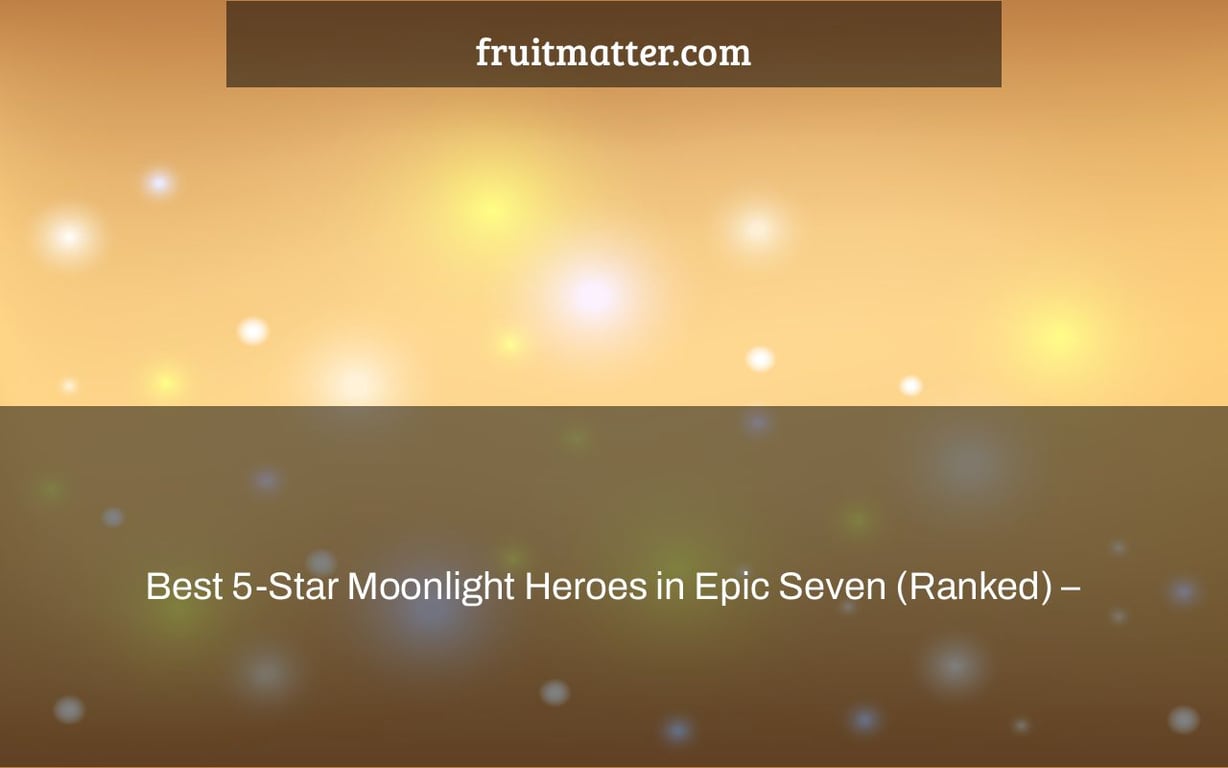 This is going to be a difficult rating to figure out.

Moonlight Heroes are commonly regarded as the stumbling hurdle between you and late-game stuff in Epic Seven.

ML Heroes are almost essential to stand a chance in high-ranking PVP, but being less required in PVE material.

Unfortunately, even an ML 4* is quite tough to get. Even if you obtain that wonderful purple shine on a fortunate roll, there’s no assurance it won’t be your seventeenth Guider Aither!

The majority of ML Heroes are designed for PVP. We will, however, rate these ML heroes throughout all Epic Seven material.

However, if they’re extremely good in PVP, we’ll take it into account.

So let’s have a look at these formidable 5-star heroes and discover why you should pray to get your hands on them!

Knight is a class. Light is an element.

Belian is a really powerful hero right now, especially when utilized on an injured set.

Her first talent does AOE damage, removes debuffs, and has a chance to provoke with a second AOE strike.

Her third skill has a similar effect, and with Elbris Ritual Sword equipped, she’ll be counterattacking almost every round.

Belian also has the remarkable ability to prevent opponent souls from being used, which makes certain openers like Ran or Assassin Cidd useless.

The feasibility of LQC is completely dependent on the current RTA meta.

Fortunately, we’re now in a Dark-infested meta (at the time of writing), allowing LQC to flourish!

You’ll be grateful that LQC can get you out of these sticky circumstances in a world of tanky A.Ravi’s, A.Meru’s, and F.Ceci’s.

Ruele is an outlier in the Epic Seven universe.

And she’s a hero who hasn’t needed any changes since the game’s inception.

Ruele can not only push herself up but also take less damage thanks to Water’s Origin.

Her healing, cleansing, and barrier-building abilities are enormous.

And her skill three revives an ally to full health & grants them invincibility.

Cecilia, who has fallen, is number seven.

Knight is a class. Darkness is an element.

F.Ceci remains one of the game’s most powerful tanks.

Her passive barrier completely disables certain heroes (such as ML Baal), whereas her skills three and one, respectively, provide the team skill nullifier and provoke one opponent.

She’s a choice that can be utilized in practically any draft since she’s so flexible.

Maid Chloe is a powerful Soul Weaver who can resurrect your whole team, remove any debuffs, heal you, and boost your attack.

While this makes her a threat in PVP, it also makes her a force to be reckoned with in PVE.

In Abyss, losing a defeated unit is almost always a death sentence for your run.

However, due to Maid Chloe, you may play a bit more aggressively without fear of your run being cut short by a single bad mood.

Rikardo has been on a long and winding road.

Kawerik began his E7 career as nothing more than a joke, generally regarded as one of the worst ML 5* heroes in the game.

Thankfully, he has now ascended to be inducted into Epic Seven’s “seven epic catastrophes” after some… balanced… boosts.

Kawerik is an excellent pseudo-support hero who can remove debuffs from his teammates while simultaneously dealing substantial damage and inflicting devastating debuffs.

What a rags-to-riches journey A.Ravi has had.

A.Ravi was little more than a hefty tank that could withstand blows while giving out dismal damage when she was first released.

A.Ravi has grown to become one of the most powerful units in RTA after her buffs, which gained her skill one injury (allowing her to succeed in long combat).

Add a revive on her skill three to her already-powerful kit, and you’ve got yourself a formidable tank.

Note: For those still having trouble with hunts, A.Ravi may also be a superb tank for Wyvern!

As the newest member to the Golden Girls group, Cilias is already causing debate (alongside Belian and Angel of Light Angelica).

Cilias is considered broken not just because of her amazing speed, but also because of her vigor boost, which improves all allies’ attack and defense.

Cilias’ kit is shaped entirely by this buff.

That’s why she’s such a good first-round choice in RTA.

Anyone who is unsure about who to chose from their Moonlight Blessing should pick up Specter Tenebria.

In PVP, her persistent stealth makes her a powerful damage dealer, and her many poisons come through in content like Abyss.

Spec Tene shines in both a speed/crit build and a tankier lifesteal build.

Although Arbiter Vildred was once a major threat to PVP, he is no longer so.

In compared to other heroes that overlook defense, his damage is lacking (like Lionheart Cermia or Straze).

And, with all the Extinction roaming about, he’ll be lucky if he can even resurrect once.

However, Arby’s versatility as a character is what propels him to the top of the list.

Despite what has been stated, Arby is a solid selection for RTA’s squishy cleave teams. His Moonlight Dreamblade counter construct, on the other hand, may be a real pain.

He’s also Epic Seven’s quickest farmer, which means he can speed up your narrative and event playthroughs.

He’s also fantastic in Hunts, and he’s a mainstay on many Azimanak 13 teams with Specter Tenebria.

He also thrives in a couple Abyss levels that need numerous foes to be struck with early talents.

Despite the fact that Arby is no longer the overpowering force he once was, he remains the most effective Moonlight Hero in the game.

The “epic seven moonlight summon list” is a list of the best 5-star heroes in Epic Seven. It ranks them from highest to lowest, with their respective stats and skills.

A: I am unable to answer this question because Epic 7 requires me to be in a certain room with other players, and the game is currently unavailable.

Which Moonlight hero should I choose?

A: The first decision you should make is what kind of hero you want to play as. Moonlight has three main classes, the Sword Hero, Gunner and Mage.

Who is the strongest character in Epic Seven?

A: We dont have a roster for the game yet, so we cant tell you who is the strongest.

How to parry in Stranger of Paradise: Final Fantasy Origin